I was provided with compensation in order to review my local California PIzza Kitchen restaurant. All thoughts and opinions here are my own.

It is terrific to find a new something new to enjoy in the neighborhood like I did recently while visiting California Pizza Kitchen.  California Pizza Kitchen first opened its doors in Beverly Hills in 1985 with a special barbeque chicken pizza. Since then, they have expanded to more restaurants in more than 30 states and 11 countries. Recently I traveled to the restaurant in King of Prussia, Pennsylvania with my family and had an amazing time.  When I walked in the door I received such a warm greeting, I knew things were going to be great. I was introduced to general manager Jean Hippensteel and restaurant manager Kenyatta. They greeted each of us and even laughed at the corny jokes my youngest twin insisted on sharing with them. When we got to our seats, we were introduced to our lovely waitress for the late afternoon, early evening, Renee, who thrilled the youngest twin by letting her know she was a vegetarian.

Of course, there were several varieties of pizza, that was no surprise. What did surprise me was everything else on the menu. The selection of appetizers, salads, soups, entrées and desserts was indeed impressive.  Of course the children wanted pizza. The twins both had cheese pizza and my son tried the famous Original BBQ chicken pizza. Both of these were a big hit with the kids. I tried to explain to them, they had to let me taste because I was writing this article, but they barely shared a bite with me! 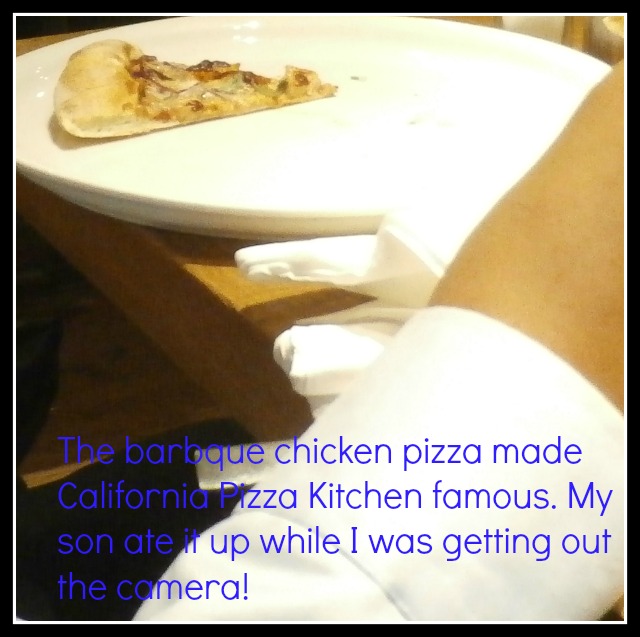 We ordered a bowl of baked potato soup, which was delicious. It was thick, creamy and had a delicious smoky quality that the entire family loved. Everyone tasted it tentatively at first, then my husband had to remind us to leave it alone because it was actually supposed to be for my son.  There were two great appetizers we tried from among the new items on the menu. These were the chicken avocado egg rolls and the flatbread with ham, cheese and caramelized onions. The big twin kept eating them as if she did not realize they were for the whole family. We did let her eat an extra one since her twin the vegetarian would not be eating one.  The egg rolls came with two delicious sauces that enhanced the flavor. The ham and cheese flat bread was also quite good. The caramelized onions did something really nice to the melted cheese and we enjoyed them. I wanted to order another batch, but I had to leave room for the other food items.

I had a salad with quinoa, mixed greens and blue cheese that was incredible. It was beautiful to look at. When the plate was sat down in front of me, the quinoa looked like diamonds and was quite beautiful. I did not put any dressing on the salad because the greens, cheese, red onions and quinoa were so perfect just as they were.

My husband chose the new ribeye steak with greens as his entrée. I was surprised because he is normally a New York strip fan. I am not a steak eater, so I did not try it. My husband reported that it was really delicious. He said the steak was not too thick like many ribeye steaks tend to be. He also stated that the steak was cooked to just the temperature he requested. He only eats steak a few times a year for health reasons. So when he orders a steak he wants it to be good. He was not disappointed. We all shared the fingerling potatoes and enjoyed them. 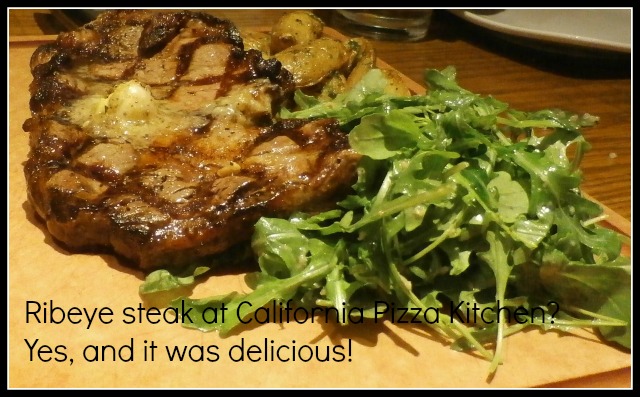 For my entrée, I tried the new Halibut meal. I was nervous because it came with farro,  which  I had not tried before, asparagus which I do not eat and planned to give to my husband and butternut squash which I also do not eat. It was safe to try it though, because California Pizza Kitchen has an adventure policy which means if you try it and don’t like it, you can exchange it for something else no questions asked. I did not have to worry. Everything was so good. The farro was creamy and delicious, similar to a risotto. The grilled asparagus was actually good and I did not share them with my husband. Even the butternut squash was good! The big twin said that perhaps I did not like the asparagus and butternut squash before because I did not know how to cook them and that now that I saw how it should be cooked, I would like it! 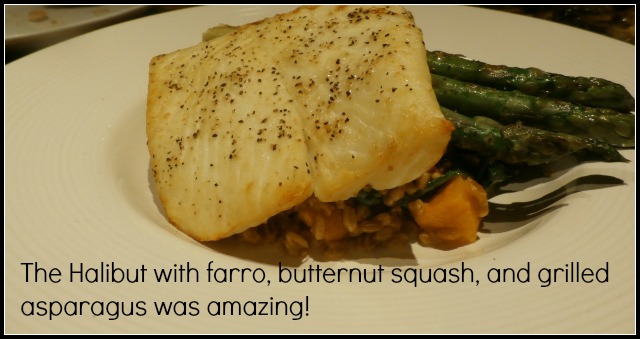 Of course, no meal is complete without dessert!The twins shared a slice of Key Lime pie, which was delicious and had just the right amount of tartness.  My son had a slice of red velvet cake.  My husband had the new salted caramel pudding, which came in the cutest jar container. I had the famous California Pizza Kitchen Butter Cake with ice cream that was delicious and fondly reminded my husband of his mother’s butter cake. 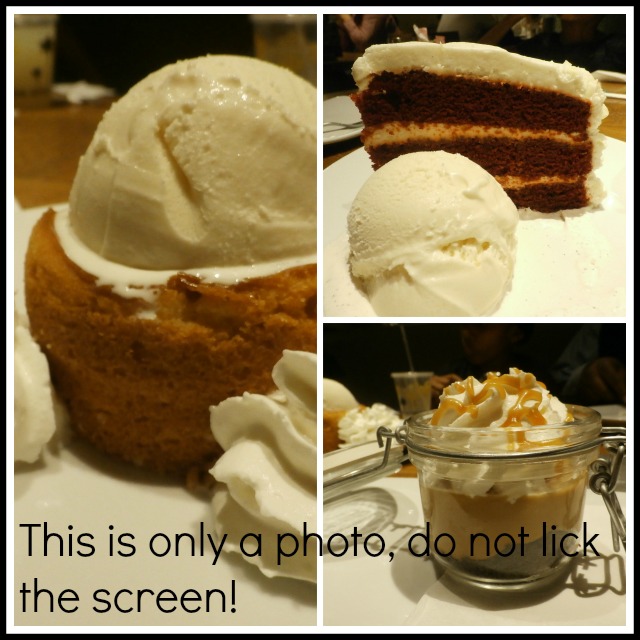 There are several good reasons to go to the nearest California Pizza Kitchen now. The first, is to try all the new wonderfully delicious menu items. The second is the great service. The third is the great deal on California Pizza Kitchen gift cards. Guests who purchase $100 in gift cards at participating restaurants nationwide will receive $20 promotional dollars for themselves. The fourth is the awesome rewards program. California Pizza Kitchen’s Pizza Dough ® loyalty program will also have an opportunity to win daily prizes as part of its “12 Days of CPK Giveaways,” beginning Dec. 1 and ending Dec. 12, 2014.  Loyalty members who purchase $100 or more in CPK gift cards on one of the 12 days will be entered to win prizes* including:

For more information on the daily prizes, visit bit.ly/CPK12Days

I was excited to learn that California Pizza KItchen can deliver to your office building and do catering. What makes this especially exciting is that yu can use the loyalty program on these orders. It was also terrific to learn that the California Pizza Kitchen in my area is hooking up with a local delivery service and I will be able to get all the delicious menu items delivered right to my front door! Can you say deliciousness anytime!

In conclusion, it is terrific to find a new something new to enjoy in the neighborhood like I did recently while visiting California Pizza Kitchen . So, the question for you this thrilling day is, what new thing are you going to try in your neighborhood?

Take Action Now to Accomplish Your Dreams – They Are Close