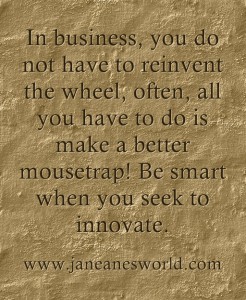 It is thrilling to run your business knowing you do not have to re-invent the wheel, instead you can build a better mousetrap. Being an entrepreneur is an exciting and noble calling. Entrepreneurship brings different things out of each person. One thing it brings out is a desire to be creative, inventive and imaginative. These are all good qualities for an entrepreneur to have. It is important to put boundaries on creativity, inventiveness and imagination so that time is not spent doing things that are not a good use of an entrepreneur’s resources.

I recently was in contact with a business associate who had a renewable energy company with a lot of promise and opportunity in a new and growing marketplace. The entrepreneurs had a reasonable amount of experience and education adequate to the task before them. However, this client was never able to succeed and was always putting out fires rather than enjoying the excitement of running a new business in a new industry. One of the main reasons for this was because this client always wanted to re-invent the wheel. Whenever one of the employees hired to do a job tried to explain to management what should be done and why, management rejected the idea out of hand. The management rejected the ideas by stating they were not new, but only improvements to existing ideas being done by competitors. Management would always acknowledge the ideas were good, that they were being used with success by the competitors. The only reason the ideas were rejected was because they were not new enough, not different enough. So, rather than moving forward with business as should have been done, my associate was paralyzed and did nothing. When it was time to draft contacts, they engaged the services of an attorney who wrote contracts that were in plain English and clearly spelled out the agreement of the parties. The agreements were rejected because they didn’t seem “complicated” enough. So, management would re-write them, they would get rejected and have to be redone. However management did not want to go back to the attorney hired, so weeks and weeks were wasted. Similar incidents happened with electricians, accountants, sales managers and human resources professionals. My associates did not want a better mousetrap, they wanted to re-invent the wheel.

To put it another way, cars roll on round wheels. The wheels are round rather than oval, triangular or square for some very good reasons. It is a good idea to look at the car and try to find ways to make the wheels work better. That is a good use of time and resources. It is not a good use of resources to try to make car wheels triangles or squares. When looking at ideas to make your business operations better, make sure you are looking at real ideas, good ideas that will serve business purposes. Do not look to reinvent the wheel just for reinvention’s sake.

When running your business, if you want to do something new and original that is a good thing, an admirable thing. In fact, it may be a thing that helps you to garner much-needed market share. As you seek to do new things, keep in mind the idea that you do not have to reinvent the wheel. Often in business the best thing you can do is build a better mousetrap.

When running your business, don’t reinvent the wheel, cars roll for a reason!

In conclusion, it is thrilling to run your business knowing you do not have to re-invent the wheel, instead you can build a better mousetrap. So, the question for you this thrilling day is, what can you do better at your business?