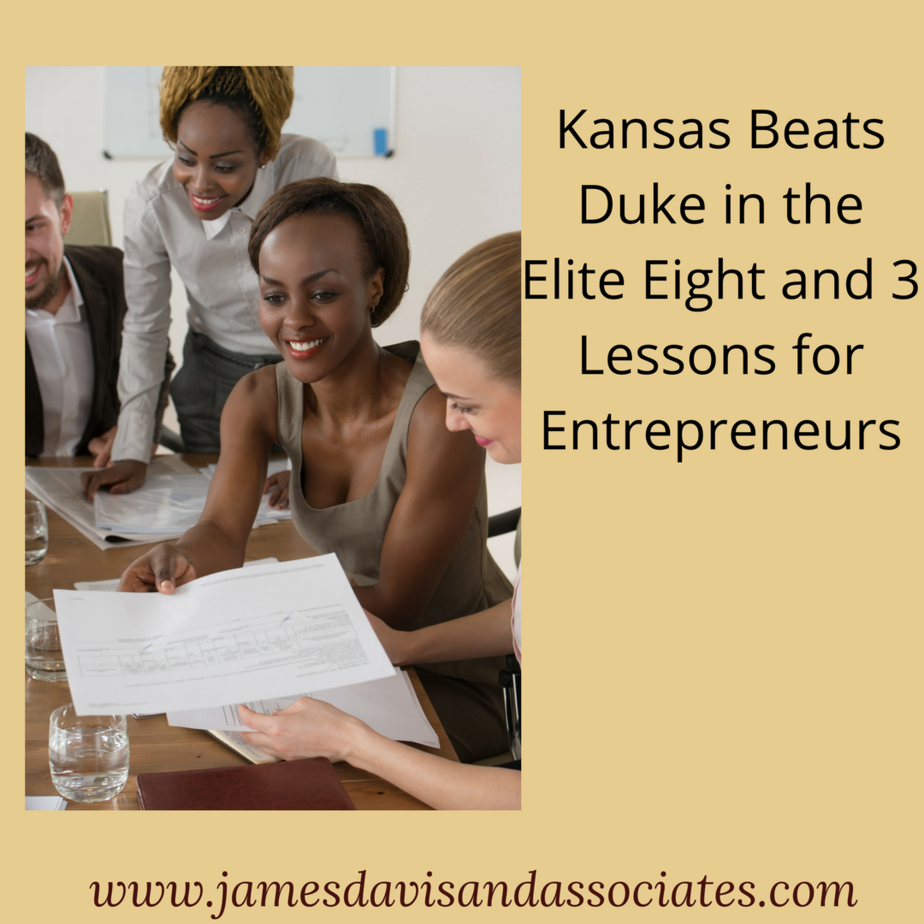 Yesterday Kansas beat Duke in overtime of the Elite Eight battle in the NCAA basketball tournament. While the Kansas victory may have made some Duke fans weep, it provided 3 lessons for entrepreneurs. These lessons include:

Don’t count your chickens before they hatch.

Duke was doing well throughout the game. Down to the final seconds of the game, Duke was three points ahead. They were poised to win and some Duke fans were planning how Duke would Perform in the Final Four. But, Kansas made a three point shot, tied the game, and forced the match into overtime. Kansas went on to win the game.

Duke thought they would win the game. After all, with only seconds left in the game, they were winning. Entrepreneurs should never count their chickens before they hatch. An entrepreneur may be in a bidding war with a competitor to get business. If the entrepreneur is smart, she will not assume she has won the battle until the contract is signed. A smart entrepreneur will not behave as though she has brought a star employee onto the team until that employee has actually started working and performing well. Smart entrepreneurs do not count their chickens before they hatch.

Never give up on yourself.

Give your best for the entire battle, never stop short.

Kansas gave their best efforts and fought to win for the entire game. Their efforts were rewarded with a victory. Sometimes entrepreneurs have to go through many steps and procedures to win business, get contracts, and make sales. Success in business is not usually a one and done type of venture. Usually success

in business is the result of doing many things each day. Success in business is  not a sprint, to the contrary, it is a marathon or two. Entrepreneurs who want to succeed know that they must give their best for the entire battle and never stop short.

“Sliver” by Langston Hughes and 3 Lessons for Entrepreneurs