Learn to Respect Authority If You Want to Succeed at Work 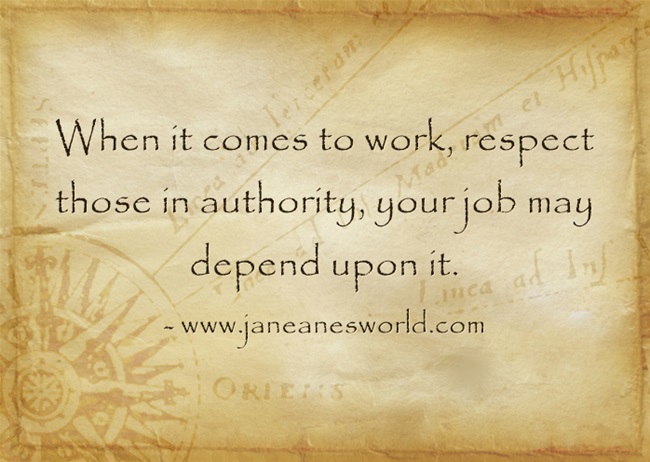 Respect authority if you want to succeed at work.

It is wonderful to learn that if you want to succeed at work, you must learn to respect authority. In the military services, there is an idea called the chain of command. Chain of command is a way of doing things so that those at the top of the organizational chart direct and control the actions of those below them. All authority and decision-making rest at the top of the chart. This idea is important in the workplace because those at the top are the ones with the power and authority to hire, fire, sign paychecks and decide how day-to-day operations will be handled. In the normal course of things, this means the owner of the company or the company president or even supervisors get to voice their opinions on how things will be handled and those decisions expect their decisions to be followed. Problems arise when those at the bottom of the organizational chart think they know better and do not respect those in authority.

It is common for people of a certain generation to say that respect must be earned not given. At the same time, those of previous generations feel that respect comes with position. These two views are often at odds in the workplace. When those in authority in an organization feel that respect comes with position, they are reluctant to listen to or give much weight to the ideas, thoughts, and plans of those at the bottom of the organizational chart. Similarly, those of the mindset that respect must be earned and not freely given find it difficult to obey the desires of those at the top of the organizational chart and often think they know much better how things should be done. No matter which of these two camps you fall into, you must find a way to work with those on the other side.

Click here to read an about how to find what inspires you to take action now and succeed.

There are reasons you should respect those in authority.

Those in authority must be respected for several reasons including:

1. They control your continued employment

2. They have the floor

3. They have the responsibility to make the decisions

4. They have paid the costs to be the boss

If you are a person at the bottom of the organizational chart, you must respect those in authority because they control your continued employment. You are not likely to remain employed if you make your lack of respect for those in authority apparent. When I was 18 years old and working one of my first jobs I told my supervisor that I was not happy at work. I told her in the tone and attitude that is typical for a young know it all. Long story short, two days later, I was trying to convince an employee at the state unemployment office that I really was fired because I was not happy at work. What those who think respect must be earned must learn, and what I learned the hard way is, there is a way to talk to those in authority that conveys disagreement with respect and sensitivity and enables one to remain employed. 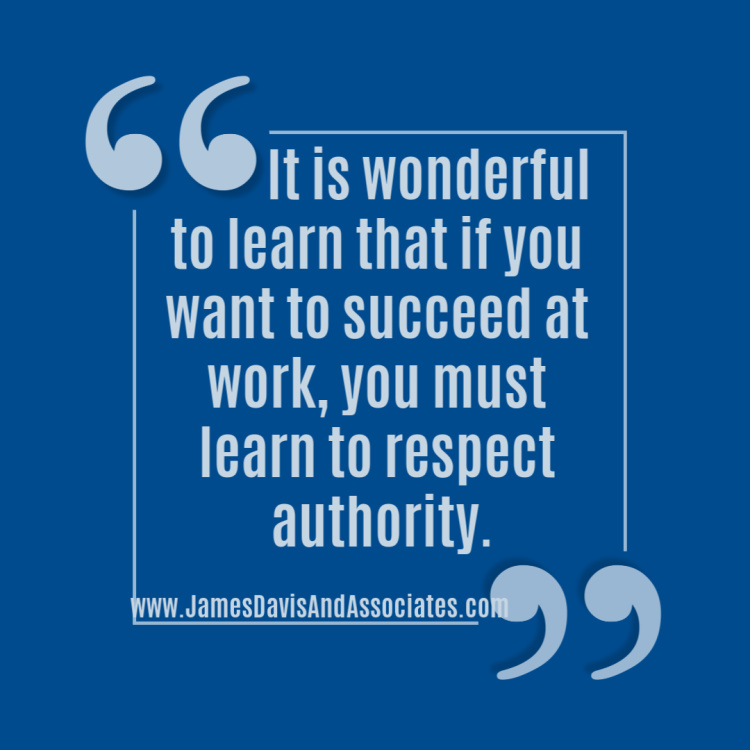 How I handled things when I learned to respect those in authority.

At my next job, once again, I thought that those in upper management were insane and did not know how to do things as well as I. However, having learned a lesson after being fired, I went to the supervisor quietly and privately to discuss things. I explained to him that we were not selling certain items because the display method being used was not efficient and the good products were being overshadowed by bad ones. Instead of going to the supervisor with a haughty know it all attitude, I went to the supervisor respectfully, calmly and with data to back up my position. This time around, I was not fired but was permitted to try my sales ideas. When those ideas proved successful, I did not gloat but instead talked about what a good decision we made and how the increased profits would be beneficial to the entire company. This lead to a promotion and an increase in pay.

Click here to check out an article on using the scientific method to make decisions.

Sometimes respect is owed because of the position a person holds.

Think about the office of President of the United States. After each presidential campaign, there are people who are disappointed that their candidate of choice did not win. They are going to be spending the next four years with a person occupying the highest office of the land that they think does not belong there. At the same time, decency requires that the President of the United States be treated with courtesy, dignity, and respect. Like it or not, feel like it or not, the respect comes with the position, no matter the person. It is a good idea to take this same attitude toward those in authority in the workplace. Those in authority have those positions and the positions demand respect.

It is wonderful to learn that if you want to succeed at work, you must learn to respect authority.

It is wonderful to learn that if you want to succeed at work, you must learn to respect authority. So, the question for you this wonderful day is, how do you show appropriate respect in the workplace?