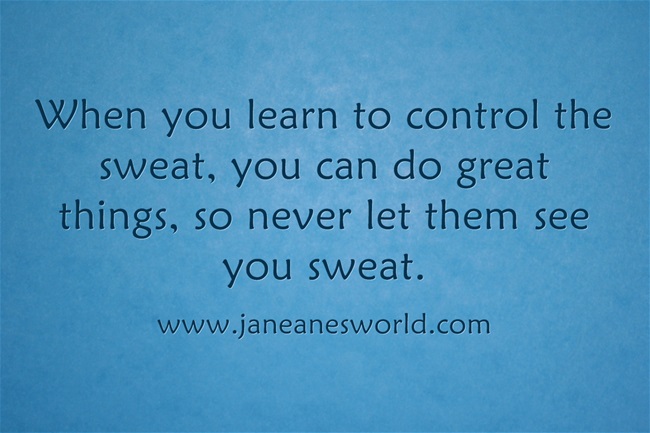 You can find serenity in realizing that you can learn things from an old spouse and I learned, “never let them see you sweat.” I am one of those women who tells old wives’ tales. I tell them because I am an old wife. I have been happily married for more than 23 years. This means I have an old husband who has been trying to teach me things for many years.

Darren has been telling me things for a long time. I mean we met when I was 19 years old many, many years ago. A lot of what he tells me goes in the left ear and out the right or in the right ear and out the left. Sometimes though, he says something to me goes in and stays. Those precious words find a home and stay to keep me company. This year I learned, really learned, “never let them see you sweat.”

On April 27, 2013 my twins and I were walking home from the market when we were struck by a hit and run driver in a Ford F-150 truck. The driver hit us, looked at us laying in the street and drove off. This was the start of the was the worst three days in my life while I waited to see if one of my twins was going to die, be paralyzed or need surgery. My daughter spent six days in the hospital. I went in with her that Thursday and stayed at the hospital, which was in another state, the entire time.

The medical staff and hospital personnel did a wonderful job taking care of my daughter. Doctors, social workers and church chaplains prayed with me. They advised me, counseled me and cared for my daughter when she could not care for herself. At the same time, as helpful as they were, as kind as they were, taking care of my baby was just one of many things they had to do that day. It was business for them, not personal. For me, it was personal. This was Zahirah, my big twin, my baby who I almost died giving birth to, who I breastfed for 16 months and who I loved for five years and 10 months.

I was scared, I was nervous, I was mad, I was worried. I was many things. My husband was at home with our other three children who still had to get to school. He had just started working at a new job and could not take off work. I had to stay at the hospital with my baby and make sure she was okay. I did not want her to wake up to strangers. I had to take notes on each medication administered, each vital statistics check, each change in personnel. Most of all, I had to stay calm and not let them see me sweat.

As I said, to the hospital staff and personnel, my baby’s care was business and business people do not respond well to tears, to crying mothers to hand wringing. They respond much better to mothers who are sitting up, taking notes, asking questions based on internet research and comparing notes and plans from one discipline of medicine to another. So, I had to be that mother, the in control mother, the mother who wanted details, answers and specific plans and procedural explanations.

For years my husband had told me, his wife who does not own a poker face, to stay calm, to “never let them see you sweat.” It was hard for me, heck it was almost impossible for me. But on April 27, 2013, his lesson, “never let them see you sweat,” became real. I learned that if on the worst day of my life, I could suck it up, put on my big girl panties and keep the sweat in check, there was nothing I could not do.

[Tweet “When you learn to control the sweat, you can do great things, so never let them see you sweat.”]

Each time I felt the tears welling up, when the fear and nervousness became almost unbearable, I heard Darren’s words, “never let them see you sweat.” I heard his words, I prayed for strength and I was able to keep the sweat in check. The lesson Darren had been trying to teach me almost since the day we met became real and I actually learned it, really learned it.

In conclusion, you can find serenity in realizing that you can learn things from an old spouse. So, the question for you this serene day is, what have you learned from your spouse?