Power – What Is It Good For 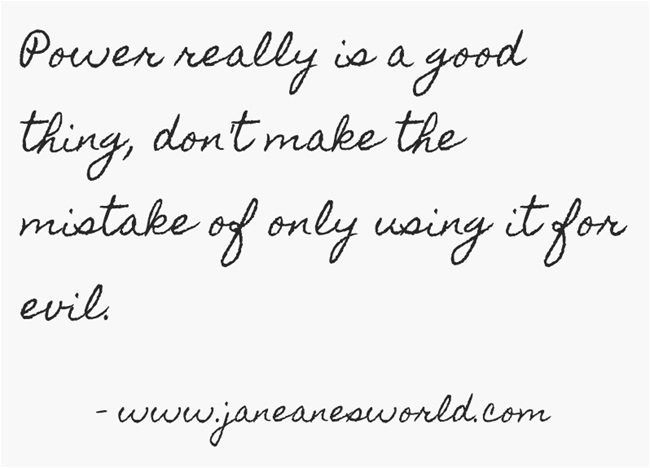 It is terrific to learn that power can be used for good and does not have to be used to hurt those around you.  One definition of power found in New Webster’s Collegiate Dictionary  is the “ability or capacity to do something,” “control or dominion or a position of control, dominion or authority,” and “a person who exercises control, influence or authority.”  These definitions, in and of themselves are not inherently negative, harmful or bad. This means that neither power itself or the exercise of power should be seen as negative or something to avoid or fear. Many people have heard the expression, “power corrupts and absolute power corrupts absolutely.” This means that it is not power itself that is the problem, but how one uses power that causes problems.

Once upon a time my husband worked with friends who owned an energy company. Which means I also worked with friends who owned an energy company. It was a great company with a lot of potential that unfortunately was never realized. It was not realized because all too soon, but perhaps predictably, the company ceased operations. I learned many things about power, both literal power and the idea of power while working with our friends and my husband at this business.  One thing I learned along the way was that one of the reason the company had trouble operating and eventually stopped operating all together, was that the owners did not understand what power was and how to use it. Their home library contained Robert Greene’s 48 Laws of Power. This book, which was originally published in 1998 gives 48 rules on what power is and how to use it. I had not heard of it before I saw it in our friends’ library. When I saw the book and its bright red cover, my eyes were drawn to it. Once I opened it, I saw quite clearly several things our friends learned from the book and were using in their actions not only with my husband and I, but also with the company, its customers, and employees.
The book did a good job of teaching them how to take control and to get what it was they wanted. Unfortunately for us, our friends and their company, there was no happy ending. The company is no longer in business and I still feel the sting of victimization, I have forgiven my friends for what they did. A few of the rules from the book that were used against us include:
Some people, in fact many people, have a great affinity for the 48 Laws of Power. I am not one of those people. Over the course of the next several weeks, I will be sharing examples of how these rules helped close a business and almost destroyed friendships several decades in the making. You will see this information, not because I want you to copy it, but so that you will be prepared when you see it coming toward you and will take steps to protect yourself. Over the course of the next several weeks, I shall be giving some examples and insights  that I learned along the way. It is my hope that you can:
1.     Learn from my experiences
2.     Protect yourself from those who see and use power only in a negative way
3.     Realize that power can be a good thing that should be used to bring people together in the workplace rather than drive them apart
Power really is a good thing, don’t make the mistake of only using it for evil.

In conclusion, it is terrific to learn that power can be used for good and does not have to be used to hurt those around you. So, the question for you this terrific day is how do you use your power?