“If you have no interest in equal rights for black people then don’t make suggestions to those who do, sit down.”

One of the great things about the United States is that people have freedom of speech. At the same time, it is important to remember that freedom of speech is not without cost. So while those who are uninterested in equal rights in America have a right to talk about it all they want, they should shut up. Those who don’t care about equal rights for blacks don’t need to tell those who do what to do or how to act. Instead, they should go sit down and leave the discussion for those who have an interest, those who care.

The world is full of people who love black culture – the food, the music, the fashion. There is nothing wrong with that. At the same time, it is important to keep in mind the fact that black culture is a real thing, it is not a costume or a toy to be pulled out, played with and disrespected at will. Black people are magic and we are real. We are human beings. We are people and our humanity and worth cannot be denied.

We are people and our humanity and worth cannot be denied.

If you would like to read more articles about how to take action now and succeed, check out the following:

You must Take Action Now because you should be the driver of your life’s train. When you sit back and let happen whatever will happen, you are in the passenger seat of your life. In life, just like in a car, the passenger has very little impact on the road traveled. When you don’t Take Action Now, you are sitting down and when you should be standing and walking. When you sit back and just let life happen rather than Taking Action Now, you are like a person who brings a knife to a gun fight. You are ill prepared and out-of-place. Click here to read more.

Take Action Now and get things done because movement is life. Almost every person alive had heard at least one reference from the book of Ecclesiastes that there is a time and place, a season for everything under the sun. That idea was good and appropriate over 2,000 years ago when it was first penned sand it is still a good idea today. The idea is that there is a point of time at which we must move. We must move because movement is how things like ideas, plans and goals live. Click here to read more.

Take a moment now to look at the actions of people you know who are able to get things done. Look at the people you know who are accomplishing things and succeeding at what they attempt. You will notice without exception, that these people are people who do more than talk, they take action now. Action is the key to their success. Adults who want to succeed move past mere conversation and take action now. Almost all of us have a friend, co-worker or character in entertainment that embodies all the bravery and confidence we wish we had. These are the women who defy time, logic and maybe even gravity in pursuit of their goals. Click here to read more.

Want to Be Happier When Things Are Rough – Take Action Now 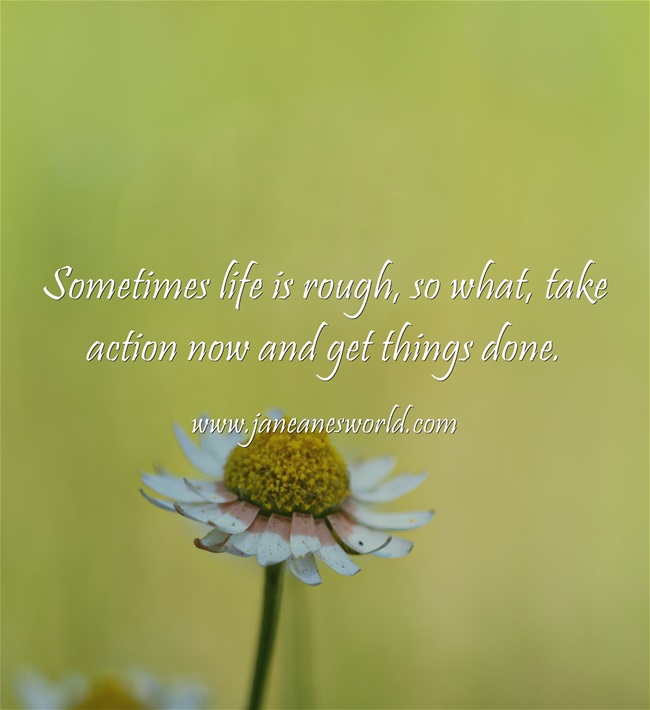 If you want to be happier when things are rough, take action now to get things done. You cannot let the trials and tribulations of life keep you from doing the things you need to do in order to succeed. There will always be problems, there will always be reasons to let fear and depression paralyze you. Don’t let it, instead, take action now, especially if things are rough and you will be happier. Click here to read more.