It is sensational to read a book that gives a different view of independence.

There are a few characters in books that I liked as a child and still like as an adult. One of those characters is one of a kind, Sherlock Holmes. As a child, Holmes seemed smart, interesting and weird. As an adult, I see Holmes as a one of a kind, smart, interesting, and weird character. I interpret Holmes as an independent figure who says what he means, means what he says and does not bow to worldly conventions. There is an interesting independent edge that I see in the character of Sherlock Holmes.
Some will argue that Holmes is a know-it-all, self-centered, drug addict. I would agree with that assessment. At the same time, Holmes is an independent person. I like the way Holmes didn’t simply depend upon conventional wisdom, traditional methods or what was expected. Holmes used his intelligence and creativity to find answers to the problems he encountered. He invented scientific tests and potions never seen before in order to solve mysteries. Holmes was an independent thinker. Not only was Holmes an independent thinker, his bad habits, conceit, and one track mind caused him to be alone and physically independent. Unlike his friend Watson, he did not share his home and his heart with a spouse. He was independent because he lived alone, did not have a lot of friends and made his way in the world.

Almost anyone can be independent in mind and spirit if one chooses that path. In order to be an independent character, figure out:

In conclusion, it is sensational to read a book that gives a different view of independence. So, the question for you this sensational day is what is your favorite independent book character? 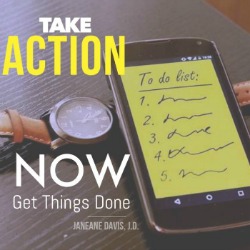 Take Action Now and Get Things Done by Janeane Davis –Does every day seem like Monday? Has your get up and go gotten up and left? Check out my new book and learn how to Take Action Now and get stuff done! Two minutes a day can help you get moving and be successful.