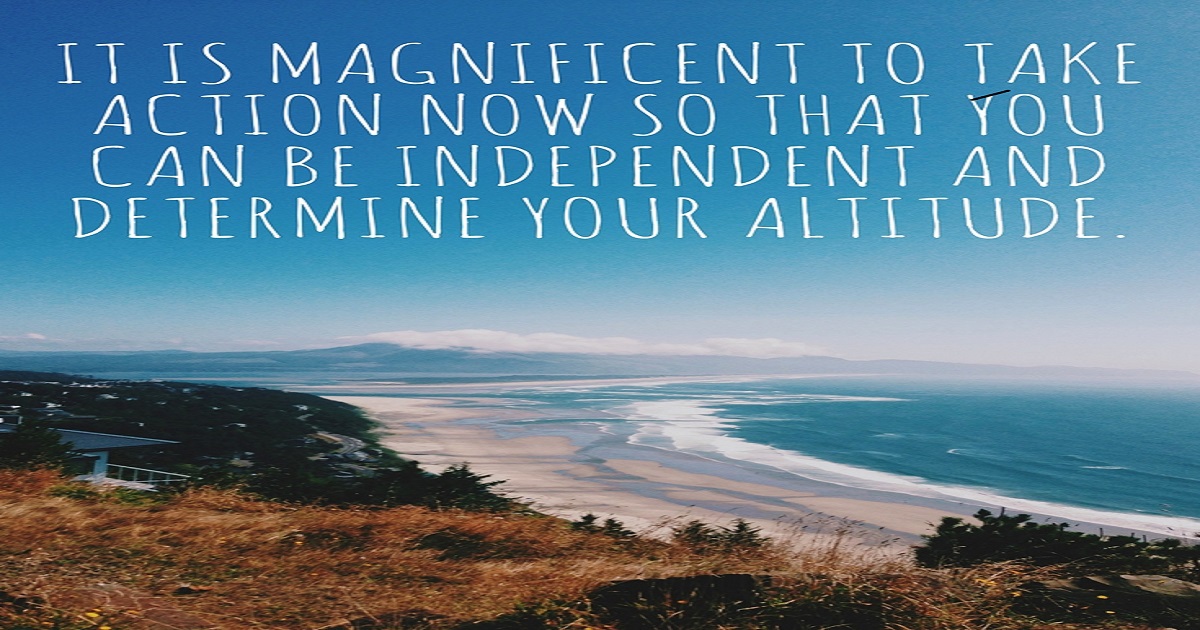 It is magnificent to take action now so that you can be independent and determine your altitude.

For me, it starts with the idea of getting to TAN. TAN is an acronym for Take Action Now. This means instead of planning, dreaming and wanting to do something, you actually get up and do the something. It is similar to a riddle I read once on social media and have repeated often since.

Situation:      There are five birds sitting on a telephone wire when three birds decide to fly to Florida for the summer.

Question:      How many birds were left on the telephone wire?

Answer:        Five, because deciding to do something is not the same as actually doing something.

This riddle illustrates an interesting principle. It is good to make plans and decisions. Planning and revising those plans over and over without ever taking action is a waste of time.  In order to be successful, it is important that we move from planning to actually take action. When we take action, we move toward completing our plans and gaining or maintaining our independence.  It is important to understand that each person controls the altitude she will reach. For that reason, it is important to take action now so that you can control your fate instead of having your fate controlled by someone else.

[Tweet “It is magnificent to take action now so that you can be independent and determine your altitude.”]

When you take action now and work towards getting your plan accomplished rather than planned, you are choosing your course in life. Taking action sets in motion courses of events that lead to your goals being accomplished. If a person wants to be independent, she must take action now and move along the road to independence.  When you take action now, you are deciding the altitude you want to reach in life. Even if you are working in an industry with a glass ceiling, you must take action to reach your goals. After all, you are more likely to break through that glass ceiling if you are at the top of the wall than if you are at the bottom of the wall.

In conclusion, it is magnificent to take action now so that you can be independent and determine your altitude. So, the question for you this magnificent day is, what action are you taking now to positively impact your future?