Unexpected Kindness At the State Fair

Witnessing someone you love do an unexpected kindness for another is a wonderful thing.

Before the teenie bopper was on the way, Darren and I went to the Pennsylvania State Fair. We looked at chickens, roosters and I laughed at a buffalo that growled at Darren. Later we went looking at all the carnival games and rides. We saw a father and his young son. The son asked his father if they could go to the movies after the fair. The father was trying to explain that they could not do both today, but maybe next week they could go to the movies. It was obvious the father did not have the money to pay for the movie after treating his son to all the state fair activities, but  he was trying to explain the lack of movie to his son in a different way. 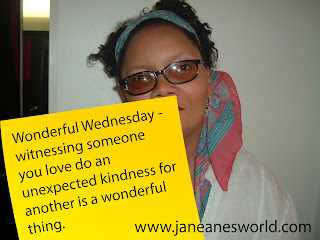 Without saying anything to me, Darren bent down on the ground, acted like he picked up a twenty dollar bill and said to the father, “Excuse me sir, I think you dropped this.” The man tried to explain that he did not. Darren insisted, that the man did drop the money and that he would hate for the man not to be able to take his son to the movies because he dropped it. The man finally took the money, thanked Darren and went off with his son. It was a beautiful thing. The little boy was going to get to see a movie. The father was able to save face and do something nice for his son. The father allowed someone to do something nice for him. I got a beautiful memory. While it is nice to do an unexpected kindness for someone else, it is also nice to witness an unexpected act of kindness. So, the question for you this Wonderful Wednesday is what is your favorite memory of an unexpected act of kindness you witnessed?